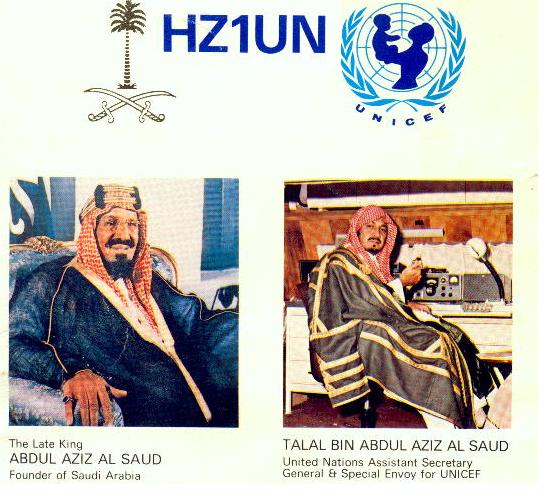 Prince Talal was the United Nations Children’s Fund (UNICEF) rep at
the GCC, Gulf Cooperation Council, and was President of the Arab Gulf
Program for the United Nations Development Organization, AGFUND.  Many
years ago, he was Saudi Arabia’s Communications Minister.  He was 87
years old.  https://www.dailyprogress.com/saudi-prince-who-called-for-
reforms-dies-at/article_b4a01381-ed45-5555-ba3a-6a346d4b90fd.html.

Talal, as he was called in the Washington, D.C. area, owned a 2,100-
acrew property in Northern Virginia for a few years, the estate
previously owned by American radio and TV personality Arthur Godfrey,
who was also a ham.  Both Talal and Godfrey were well-known
celebrities in the area.  Godfrey had a TH6 tribander.  The Prince
added a Telrex Big Bertha with stacked monobanders, with local advice
from W4QAW, who lived nearby and had a multi-tower (AB-105) station
with Telrex monobanders.  Godfrey had had an indoor ice-skating rink
in a log building.  Talal converted it to an elephant barn, stocking
the estate with exotic animals, turning it into a “game farm.”
From the Washington Post newspaper: “In 1979, Godfrey sold Beacon Hill
to Saudi Prince Talal bin Abdul Aziz Al Saud. The prince, who rarely
visited the estate, spent $10 million to renovate the mansion, which
has 11 bedrooms, 11 bathrooms, 13 fireplaces and three kitchens. He
later built a villa nearby with an indoor swimming pool and
racquetball court, two elevators, four kitchens, a soccer field and a
heliport.

“He sold the estate in 1986 for $16 million to Beacon Hill Limited
Partnership, the group whose development plans drew opposition from
neighbors. The partnership, which included former Secretary of State
Alexander M. Haig Jr. and Porten Sullivan, a major Washington area
home builder, unsuccessfully tried to sell the villa and mansion for
$10 million to finance the construction of the other homes. The deed
to the land, held by a failed Vienna savings and loan institution,
eventually wound up with the Resolution Trust corporation, which
auctioned off the land last June.” (1995).